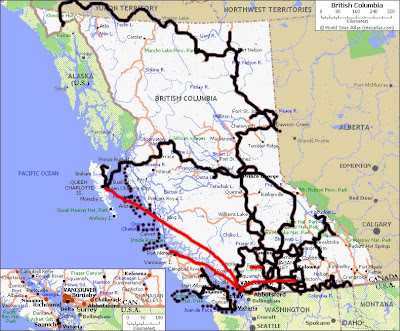 It's really hard to make a list like this of course but here are a few of my favourite moments from this wild year (In chronological order):

-Driving through the icy-foggy Fraser Canyon at night in February (Williams Lake to Ladner overnight dove-twitch with Kevin Easthope), and realizing that this kind of thing would become the norm.

-Hustling (or whatever it's called when you punch through thigh-deep snow and crawl over burned logs on a steep slope) 2km through the darkness for a Spotted Owl. Not only did we get to see the pair at point-blank range before they headed out to hunt, but on our slog back to camp, wolves filled the night with their mournful chorus (March in the Stein Valley)--and can't go wrong with a free heli ride!

-Breaking the BC Big Day record with 197 species in 24hours, the last being a pair of Barred Owls calling in a wind-storm at Crescent Park near White Rock, BC.

-Finally finding a single male Cape May Warbler at the Beaver Lake Rec Site along Hwy 77 NW of Fort Nelson. If it hadn't been for that one bird, I might very well have quit the year... thank you Mr. Cape May!

-Watching thousands of alcids stream out of Triangle Island at dawn (August)--including over 7,000 Tufted Puffins and 1 Horned Puffin!

-Hearing someone yell, "LAYSAN!!!" on a September pelagic off Tofino

-EARLY NOVEMBER: From a fantastic Haida Gwaii trip to the mega-rarities down south!
Posted by Russell Cannings at 12:15 PM No comments:

Big Birding Years are a fun way to challenge yourself. Your skills will undoubtedly improve as you learn more about identification and attempt to anticipate where particular birds will turn up and when. Big Years can be done in large areas like BC, or you can do them in an area as small as your yard. It's a way of motivating yourself to get outdoors and visit areas that you might not otherwise know about. It adds another fun angle to an already enjoyable past-time, and can also bring fellow birders together in the spirit of friendly competition! And of course you can add a healthy-flavour to it by making it a non-motorized year!

Although many folks won't be interested in the more-or-less "high-octane" style of Big Year that I performed in 2010, a self-paced BC Big Year can be attractive to many and I would thoroughly recommend it. Just by visiting Vancouver Island, Vancouver, the Okanagan, and the Peace River regions, in one year (at appropriate times)... any birder could rack up close to 300 species-- That's a lot of birds!

For those interested, here are some strategic pointers and some personal stats:

#1 Rule: If you're serious about a big year, you need to chase rarities. You miss them half the time but in the long run it will be worth it!

April-May: It's migration time. The two main places you want to be are #1 The Coast (for rarities and shorebirds), and #2 The Okanagan (for tough breeders like Grasshopper Sparrow, Flammulated Owl, and Williamson's Sapsucker). This is also the time you want to clean up on all passerine breeders if possible--everything from Black-throated Gray Warbler to Boreal Chickadee.

June: Best time to visit the Peace Region as all birds are back and singing away. I found that July was getting a little late for birdsong and May was slightly early for some species. If possible you can continue north-west up the Alaska Highway for more northerly breeders like ptarmigan and Arctic Tern etc., at least rarities tend to tail off around June-July.

July-October: Seabirds, shorebirds, and rarities. This is the CRUNCH TIME which will make or break your year. Basing yourself near the coast will be helpful but if your big year is centered around your home-turf, you can still find some goodies.

Nov-Dec: Winter clean-up and sporadic rarity-chasing. I only added 5 species in November and only 1 in December. Some years can be better than others. Good birds did show up but they were things I already had like Acorn Woodpecker, Palm Warbler, Iceland Gull, and Northern Mockingbird.

Well it's over now. Time to reflect! I've checked the list a couple times and things seem to be in order. 373 species seen [355 self-found]including the American Black-Ducks of Yellow Point (which Mike Toochin also tallied), and the freshly split Winter/Pacific Wrens. I also counted Cackling Goose, Dusky Grouse, and Eurasian Collared-Dove which were not on the checklist when Mike and Sharon did their big year-- on the other hand, Crested Myna has disappeared since then.

In addition to the full species, I also attempted to rack up various subspecies that could possibly warrant splits in the future. These include:

-Both "Taiga" and "Franklin's" Spruce Grouse

-The laingi subspecies of Goshawk (Haida Gwaii and Vancouver Island)

-"Richardson's" Merlin (east of the Rockies)

-The southern wymani (nominate) race of Western Gull. A single adult was observed near Tofino that was distinctly darker than typical occidentalis Western Gulls. Photos were taken--hopefully we can follow up on this in due time.

-Both "Myrtle" and "Audubon's" Yellow-rumped Warblers

-Red, Sooty, and Slate-coloured Fox Sparrows... and a few mixes!?

-at least 4 types of Red Crossbill

***And a couple key types that I missed:

Some of you will notice that I have a "MISSED" page up (links for all pages are near the top of the main/Home page). By looking at those misses (plus a bunch of others since around 410 species were seen by all in BC in 2010), I think it would be possible to get 380 in a year. This would require absolute dedication, sound planning, and lots of luck. Finding a way to get further offshore (i.e. 100 nautical mile range) would also help!
Posted by Russell Cannings at 9:18 PM No comments:

Time to give thanks!

First, the THANK YOUS! This year was made truly special by all of you who got involved; Either by providing a couch to sleep on, offering a vehicle on a "twitch," sending messages of support, reading this blog, and just "going birding." I can't begin to tell you how thankful I am. Not only did I break the record, but I learned so much about the province and its birds and was able to share it with everyone... so many people took me out around their local patch and showed me the best nooks and crannies to find birds, and brave were those who volunteered to join me on crazy drives from the Okanagan to the Yukon or NWT and back... what a ride! Sorry but I feel the need to mention a few names (luckily there is no Oscar music to cut me off!). I'm sure I'm missing a few people but here we go---

Housing (key to my survival):

I also want to thank John Cooper, Suzanne Beauchesne, Harry van Oort and the entire CBA staff for being so flexible and understanding (whilst providing the main dollars behind this project!)... like letting me drive from Golden to Dunbar for a Costa's Hummingbird when I should have been doing data entry! Truly a fantastic company to be apart of!

"Big Ups" to Michael Force, Danny Tyson, Michael Bentley, Roger Foxall, and Mike & Sharon Toochin for setting the BC Big Year bar sooo high and lending support throughout the year. I have a feeling this record might already be in jeopardy?!

And last but most importantly, I need to thank my parents Dick Cannings and Margaret Holm... could NOT have done this without your support, whether it be strategic, emotional, financial, or otherwise, you were always there to kick me out of bed when I was being lazy, and give me "that look" when I felt like giving up.
Posted by Russell Cannings at 3:06 PM 1 comment: 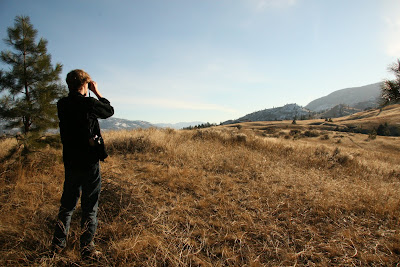 And now for peace...
Posted by Russell Cannings at 4:15 PM No comments: 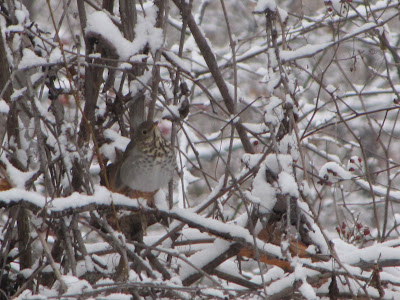 Yesterday (Dec 19th) I went out on the Penticton CBC, and helped cover the Okanagan lakshore and a portion of the local Indian Reserve (the Locatee lands). Despite the constant snow we had some great birds including 4 MEW GULLS, 55 GLAUCOUS-WINGED GULLS (high number for the south Okanagan), 7 RUBY-CROWNED KINGLETS (all in the Locatee lands), 1 SWAMP SPARROW (Locatee), 1 PURPLE FINCH (my first ever for the Okanagan--also in Locatee), and this HERMIT THRUSH (my first winter-find of this species in the Okanagan... of course it was also in the Locatee property--what a spot!).

Today (Dec 20th), my Dad and I hiked back into Locatee and managed to re-find the PURPLE FINCH and as luck would have it... another 4 species I missed the day before! This would have brought the day list to close to 70 but ah well... The highlight was seeing 2 SNOW BUNTINGS flying over the West Bench on our walk home.
Posted by Russell Cannings at 4:07 PM No comments: 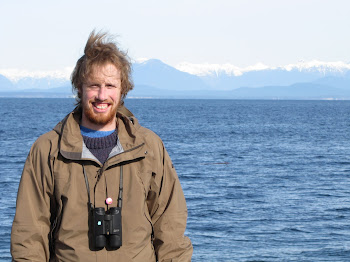 What will be my last bird of the year?